Sat Feb 15 02:57:33 2020
<5547a085> <https://en.m.wikipedia.org/wiki/Ultraviolet_(film)|https://en.m.wikipedia.org/wiki/Ultraviolet_(film)>
— Ultraviolet (film)
— Ultraviolet is a 2006 American dystopian science fiction action film written and directed by Kurt Wimmer and produced by Screen Gems. The film stars Milla Jovovich as Violet Song, Cameron Bright as Six, and Nick Chinlund as Ferdinand Daxus. It was released in North America on March 3, 2006. The film was released on DVD and Blu-ray Disc on June 27, 2006.
The film follows Violet Song Jat Shariff (Jovovich), a woman infected with hemoglophagia, a fictional vampire-like disease, in a future dystopia where anyone infected with the contagious disease is immediately sentenced to death. With her advanced martial arts, a group of rebel hemophages, and a boy named Six (Bright), whose blood may contain a cure for the disease, Violet goes on a mission to overthrow the futuristic government and defeat Ferdinand Daxus (Chinlund).
A novelization of the film was written by Yvonne Navarro, with more back-story and character development. The book differs from the film in a number of ways, including a more ambiguous ending and the removal of some of the plot twists. An anime series titled Ultraviolet: Code 044 was released by the Japanese anime satellite television network Animax, and created by Madhouse. 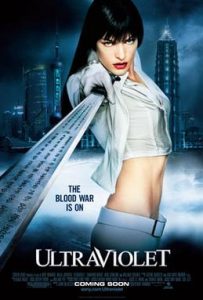