Tue Feb 18 16:34:14 2020
<8f79fcda> let me start by saying that i’m happy you called this chan machine learning not “AI”
<8f79fcda> cuz AI is a farce
<773ab1f1> So I had a quick convo with some guy on that exact topic on monday.
<773ab1f1> In the biz, someone asking for AI is akin to someone asking for blockchain not bitcoin
<773ab1f1> it shows such a fundamental misunderstanding of what is going on, that you have proven to those ‘in the know’ that you are basially an idiot
<773ab1f1> I recommend looking at ML investments over the past two years by large orgs.
<8f79fcda> my last CTO has a doctorate in “AI”
<773ab1f1> All the fun is happening in ML.
<8f79fcda> keyword “Last”
<773ab1f1> Dude the AI rabbit hole is intense. The way the guy explained it was this way:
<773ab1f1> We are trying to build AI. Some people model it after humans and keep trying to use that paridigm to understand it.
<773ab1f1> But thats like trying to learn how to fly from birds
<773ab1f1> Nah, you need to focus on air foils, lift, and aero dynamics
<8f79fcda> interesting
<773ab1f1> As a matter of fact, if you are trying to move 300 people, a bird is a ridiculous thing to study
<8f79fcda> lol
<8f79fcda> my primary issue is that people worship AI as if it were a god, and the broader fact is that it’s an artificial construct
<773ab1f1> Its hard to even define properly. Just like in crypto, you wana avoid the fly traps and goopy rabbit holes
<8f79fcda> technically the statement “I am an artificially intelligent quantum-enabled supercomputer” applies to every human on the planet
<8f79fcda> or “biocomputer”
<773ab1f1> The big gap orgs are facing right now is defined as such
<773ab1f1> Dev tools are just now getting stood up to allow regular dudes like you and I to auctually develop these algos. No PHD needed.
<8f79fcda> Artificially (Of the arm of man)
intelligent (of or pertaining to ability to intake, discern, and process information)
Quantum (of the physical structure of the universe)
<8f79fcda> agreed
<773ab1f1> People need to focus on solving real world problems, real business use cases that deliver value. Don’t boil the ocean
<773ab1f1> Man, I’ve been watching these conferences, and they are passing back academic papers arguing nuance. Which is cool, i’m down.
<773ab1f1> But also, lets get this bread
<8f79fcda> there’s more money in loosely defined goals that take forever to render benefit from, than there is to solve the actual problem
<8f79fcda> me and a group of friends built a survey tool to get a topology of west-african ebola in a weekend
<773ab1f1> The advice I got was, get that minium viable algo up and crankin
<8f79fcda> I talked to some lady at the WHO and she said “this upsets the balance of power and therefore cannot be accepted”
<773ab1f1> The accuracy depends on the use case. Sometimes 85% is fucking world changing. 86% would be nice, but whatever we are rockin
<8f79fcda> yep agreed
<773ab1f1> sometimes its ‘we need 99.99999% accuracy or people die’
<8f79fcda> yup
<8f79fcda> so back to the issue at hand… how do they value their ML models… depends on the company’s sophistication.

Most companies using ML are chop-shop social media companies that want to juice images for every insight they can find
<8f79fcda> big industrial companies are using it for optimization
<773ab1f1> Reason I ask the question, is to gain insight to the market as a whole. Also, I want to be able to properly demonstrate cyber risk to the business. If this model is worth 50$ million, well that changes the security needs now doesn’t it.
<773ab1f1> Dude there may be some 100million$ models out there.
<773ab1f1> one day, there may exist a billion dollar model
<8f79fcda> so, in the first case, social media, it is a profit center inasmuch as insights rendered can acquire a new customer or get an additional penny from a current customer
<8f79fcda> in the indsutrial case, it’s a cost center to reduce cost and inefficiencies
<8f79fcda> FB itself is a gorillion dollar ML model
<8f79fcda> do you have a target company? if i have a conceptual company target, i can target the high liklihood areas of ML usage
<8f79fcda> I’m looking for the trillion dollar ML model
<8f79fcda> if you’re looking at threat detection as an ML model – those are the most valuable
<8f79fcda> Banking sector
<8f79fcda> banking sector portfolios of ML models are highest value
<8f79fcda> and that’s why blockchain and bitcoin present such a conundrum… it’s random hashes and the only nuance is the length and known context of a merkle tree
<8f79fcda> it’s a “beat them or join them” kinda thing for banks
<8f79fcda> TBH, <@U03694HFD> would have a better boots-on-ground idea of the application of ML models related to clients
<8f79fcda> because his company bills direct to client for ML work (<@U03694HFD> correct me if i’m wrong)
<8f79fcda> or at least scientific compute
<8f79fcda> all this ML talk wants me to get my jupyter notebook going
<8f79fcda> that being said, the ML models with the most value are straight-up black boxes that people don’t want to show
<8f79fcda> so cybersecurity has to do with GIGO
<8f79fcda> the biggest threat to ML models is bad data
<773ab1f1> I’m pretty sure the quintessiential example would be tesla
<8f79fcda> gotcha
<773ab1f1> This is in line with what boots on the ground guys at microsoft say
<773ab1f1> (about the biggest threats) Let me show you this survay….
<773ab1f1> 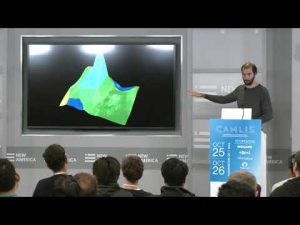 <773ab1f1> Due to the fact that the algos are such a black box, no one knows how to evaluate the robustness of a model
<773ab1f1> Image recongition failures in robustness are relatively easy to identify cause we can use our ‘human vision system’ to quickly and easy identify something miscatorgized
<773ab1f1> we don’t have such a system for raw data
<8f79fcda> outside of this group – THEY don’t 😉
<8f79fcda> the philosophical question is “is there such thing as raw data”
<8f79fcda> so there’s an issue with … well… binary and lossless data transmission
<8f79fcda> lossless data transmission is spooky actions at a distance in quantum mechanics
<8f79fcda> and with quantum cumputers, they’re saying the world is more than male/female, but transgendered binary
<8f79fcda> in practical application, quantum computers are random number generators that work so fast that we, as humans, discern that the QC “came up with the right answer”
<8f79fcda> when it just tried an unimaginably large number of permutations in short order and the techs receiving the output that proved the hypothesis that they wanted to prove in the first place
<8f79fcda> i guess my disillusionment is based on the fact that the size of the data sets they are crunching are huge
<8f79fcda> so to get a “this is the answer to all the question” type of result from a quantum computer, it still limited to the fidelity of the data input, and the intention and biases of the techs using the computer
<8f79fcda> if there’s anything i learned from accounting… it’s that, you can make “the numbers” say anything you want
<8f79fcda> but that doesn’t mean it’s reality
<8f79fcda> formulating the question is the most important part of the process.
<8f79fcda> so, to ask businesses “why do you want AI/ML” or “why do you want blockchain/bitcoin”
<8f79fcda> 99% of answers are “to pay a mortgage” just like in that movie “thank you for smoking”
<8f79fcda> i have to meet my revenue targets, so i want ML to better predict purchasing, so i can find where to most efficiently deploy my products, so i can justify my job, so i can get a salary, so i can pay my mortgage, so my wife will give me a blowie
<8f79fcda> and it varies per person. some people’s “currency” is power, for some it’s esteem/prestige
<773ab1f1> The was the exact feedback I got from a ML expert a few days ago
<8f79fcda> others want moneymoneymoney
<8f79fcda> crossover episode with <#CCU45D75M|menslounge>
<773ab1f1> You touched on something earlier, about ML being a profit or cost center.
<773ab1f1> Do you have any experince as to which orgs are most likely to invest in first. My gut tells me profit (duh), but I suspect it has more to do with what they consider their core competency to be
<773ab1f1> I guess their core compentcy would dictate what is considered a profit and cost center so the question is loaded
<8f79fcda> porn industry are early adopters of everything – they’ll try anything…
<773ab1f1> I mistyped the question, where in existing orgs. i.e. where should firestone tires invest in ML
<8f79fcda> but you’re right – core competency would more or less dictate
<773ab1f1> (firestone is my quintesstial stone as it relates to tech comapny. I used to consult there and they were livin in the stone age)
<8f79fcda> firestone tires. that’s a good one
<773ab1f1> Sales will prob see a larger increase in their bottom line for the quarter, manufacturing will take longer to materialize.
<773ab1f1> ‘Adopting ML’ has many different forms too. ‘Using salesforce SaaS’ I guess is techinically adopting ML
<8f79fcda> lol a good buddy of mine… his mom makes natural latex and sells it to firestone
<8f79fcda> cost-center low-hanging fruit: supply chain disruptions due to a potential rebel group taking rubber trees
<8f79fcda> like… no shit, his mom was having a hard time selling her rubber to Laos (a processor of raw latex) because the communists took over the government and closed the border
<773ab1f1> So let me draw an analogy from cybersec. If I could tell you in three sentences what orgs should be doing it is this: Identify your security maturity level. Let that dictate where you marshall your resources. Firestone tries doesn’t need honeytrap/honeytokens etc. They need account lockout on AD. Complexity in your enviroment is the enemy of security. Don’t buy something your don’t have the staff to manage. Get buy in from c-suite.
<773ab1f1> What do you think the three sentence answer is for ‘how and when to adopt ML’
<773ab1f1> Whats more I would say ‘understand the trajectory of your business. it is the goal of the security guy to understand that, and bend that trajectory to a slightly more secure place’
<8f79fcda> when your company knows it’s core competency and has an established strategic plan