Tue Mar 17 20:47:33 2020
<6707bcd9> <https://en.m.wikipedia.org/wiki/Cura_Annonae|https://en.m.wikipedia.org/wiki/Cura_Annonae>
— Cura Annonae
— In ancient Rome, the Roman government used the term Cura Annonae (“care for the grain supply”), in honour of their goddess Annona, to describe the import and distribution of grain to the residents of the city of Rome. Rome imported most of the grain consumed by its population, estimated to number one million people by the second century AD. A dole of subsidized or free grain, and later bread, was provided by the government to about 200,000 of the poorer residents of the city of Rome.
A regular and predictable supply of grain and the grain dole were part of the Roman leadership’s strategy of maintaining tranquility among a restive urban population by providing them with what the poet Juvenal sarcastically called “bread and circuses”. In 22 AD, the emperor Tiberius said that the Cura Annonae if neglected would be “the utter ruin of the state”.The most important sources of the grain, mostly durum wheat, were Egypt, North Africa (21st century Libya, Tunisia, Algeria, and Morocco), and Sicily. The logistics of moving the grain by sea from those places to Rome required many hundreds of ships, some very large, and an extensive system for collecting the grain and distributing it inside Rome itself. The archaeological records of the grain trade are sparse, due to the perishability of grain which has made its detection difficult for archaeologists.The population of the city of Rome declined precipitously during the 5th, the last century of the Western Roman Empire, and 6th centuries AD. It is unknown when the Cura Annonae ended. It may have persisted into the 6th century. 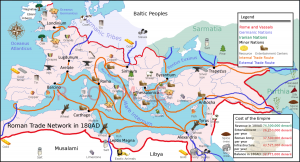