Fri Jan 24 00:37:13 2020
<8f79fcda> “`01/22/2020 03:21 PM
I am Chinese from Wuhan, no one can leave the city or enter the city, total cases here is 170 dead, over 5000 infected
We cannot leave the city anymore, we cannot allow others to enter the city, the army is guarding all exit-entry point. All forms of mass transit have been lockdowned, including the airport, they will let us all die here
I’m seen soldiers in full hazmat suits here in Hanyang, from my second floor appartment window, they are spraying something fluid on the streets via large trucks using water cannons
USING VPN, here it is not allowed to talk-criticize about the virus, jail sentence is sure if one does
Fang Zhong, within the institute people are very very alarmed of what will happen to us
I know personaly that at least two IOPCAS scientists have been put under house arrest, the virus is not what the WEST thinks, it is much more dangerous because it mutates from person to person, at first slightly, but could re-emmerge under total different form within weeks
Our collegues counted over 5000 cases within the city center as of yesterday 1pm
They will never let us leave the city, because the virus will spread within exponentially, doubling every two days, this is extremelly contagious, the virus stays in the air for 24 to 48 hours
People will panick, the sun rises very soon, most are unaware that the city is on total lockdown
In Baofeng sector alone, our collegues counted 1400 cases, many people have dissapeared, their loved ones searching for them in hospitals
I go to Central China University, I am from Changsha
Do you have somewhere stocked with supplies where you can shelter in place for a few weeks (or months) where you can wait it out? Is your family trapped in the city with you?
Quoting: Anonymous Coward 77547432
No, in China it is not possible, cameras see everything, we would be labelled as enemies and traitors, we must stay put and wait from Central Party orders
There is panic and choas in all are Wuhan hospitals, people are dissapearing with no trace and no bodies are found
Stay safe.What is the origin of this virus? I heard it originated from local food market.Probably some kind of animal was source
Quoting: Anonymous Coward 78370173
They say here Guinea pigs
All my family is outside the city, so they will be ok, they live in rural area, we fear about the water, we are wondering if the water gets infected, what do we do?
No more N95 mask can be found since last Sunday, not one left in the city
When people wake up, the entire city will want to leave, it’s going to be crazy, most people here are sleeping and don’t know they can’t exit the city
I see people leaving, in my apprtment block light are starting to blink, people are waking up and hearing the news, my neighbour is leaving, they say the roads are still free to get out of Wuhan, I don’t know, but there will be huge traffic jams
The last planes are landing at the airport and the people don’t know they won’t be able to leave
Thank you, yes I’m staying put, the University will be closed I think
Convoy of large army trucks here in Yuanbaoshan area in Wuhan
That was nothing, he needed help with electric wires, no more power.
It is confirmed, army is securing road blocks at all entry exit points in Wuhan, they say it is a massive operation
There are many people living here who are very poor, with bad health, supplies won’t be coming in anymore, or very little
Our running water system is very weak, if the workers cannot get transportion to the plant, it will shut down (I got the answer to the question earlier)
I am leaving with a small cart my neighbour gave me for helping him, going to buy as much food and drinking water as possible, my supermarket opens in 20 min“`
<8f79fcda> <https://www.reddit.com/r/The_Watch/comments/esut0d/from_a_chinese_student_on_the_epidemic_in_china/>
<d3f496ca> American expats in wuhan are saying they are spraying disinfectants from planes in the air
<d3f496ca>

<8f79fcda> Sounds like a larp. Small inconsistencies as pointed out by other users (like the time date format).

Like…proof that the virus mutates from person to person and is airborne for 24-48 hours. How would OP know that? They wouldn’t learn it from the CCP. They certainly wouldn’t know it just from the behavior of the virus as witnessed by someone outside a lab.

In favor of the OP is that it does seem unprecedented to lock down, now 3, cities filled with hundreds of thousands of people over a case of, officially reported, 500+ cases and only 17 dead? Videos streaming out of china are also counter to the official narrative.

But it’s a long way from “government downplaying its actual woes” to “super hybrid ultra virus is burning the life out of whole cities”.

There are plenty of other narratives in between that fit. Like the PRC doesnt want a relatively routine, yet virulent case of flu to knock a chunk out of its GDP during a time when it is especially vulnerable and could spook markets and trade relations.
<8f79fcda> i’m just pulling drop quotes from the thread
<8f79fcda> <https://www.reddit.com/r/The_Donald/comments/et28gi/unc_scientist_creates_possible_vaccine_for/>
<8f79fcda> inb4 china blames america
<8f79fcda> <https://www.youtube.com/watch?v=vALpbIhQrVk>
— UNC scientist creates possible vaccine for Coronavirus 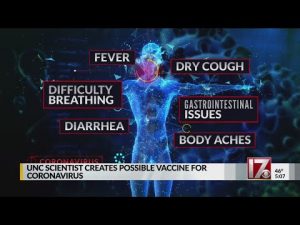