Fri Feb 21 03:25:35 2020
<8f79fcda> <https://en.m.wikipedia.org/wiki/Kilroy_was_here|https://en.m.wikipedia.org/wiki/Kilroy_was_here>
— Kilroy was here
— Kilroy was here is an American symbol that became popular during World War II, typically seen in graffiti. Its origin is debated, but the phrase and the distinctive accompanying doodle became associated with GIs in the 1940s: a bald-headed man (sometimes depicted as having a few hairs) with a prominent nose peeking over a wall with his fingers clutching the wall.
“Kilroy” was the American equivalent of the Australian Foo was here which originated during World War I. “Mr Chad” or just “Chad” was the version that became popular in the United Kingdom. The character of Chad may have been derived from a British cartoonist in 1938, possibly pre-dating “Kilroy was here”. According to Dave Wilton, “Some time during the war, Chad and Kilroy met, and in the spirit of Allied unity merged, with the British drawing appearing over the American phrase.” Other names for the character include Smoe, Clem, Flywheel, Private Snoops, Overby, The Jeep, and Sapo.
According to Charles Panati, “The outrageousness of the graffiti was not so much what it said, but where it turned up.” It is not known if there was an actual person named Kilroy who inspired the graffiti, although there have been claims over the years. 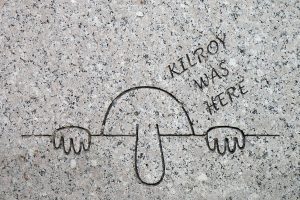 <8f79fcda> Do you think there’s a Kilroy on the btc blockchain?