Wed Jan 15 18:10:07 2020
<9e126bf3> <https://en.wikipedia.org/wiki/MONIAC>
— MONIAC
— The MONIAC (Monetary National Income Analogue Computer) also known as the Phillips Hydraulic Computer and the Financephalograph, was created in 1949 by the New Zealand economist Bill Phillips (William Phillips) to model the national economic processes of the United Kingdom, while Phillips was a student at the London School of Economics (LSE). The MONIAC was an analogue computer which used fluidic logic to model the workings of an economy. The MONIAC name may have been suggested by an association of money and ENIAC, an early electronic digital computer. 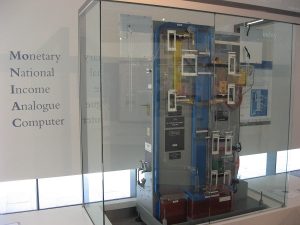 <8f79fcda> if you could populate a visualization system db with volume and price data, you could probs get some pretty cool stuff
<8f79fcda> like, volume be amount of water, price changes being temp represented by color